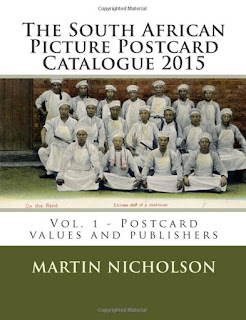 Both these volumes are available from Amazon
﻿ 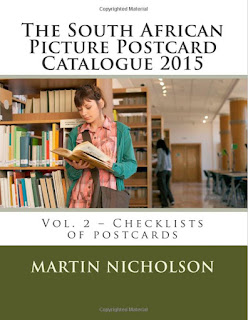 As a former stamp collector the idea of conducting my hobby without the use of a full-colour priced catalogue would have seemed ridiculous. Many such catalogues are produced each year - ranging in scope from those covering the whole world in a highly simplified format to others covering the issues of a single country in great detail. It therefore came as a great surprise to me to discover that no catalogue had been produced covering the activities of the many postcard publishers who had been in business in South Africa in the early part of the twentieth century. Starting in the 1980's the now defunct Southern Africa Postcard Research Group (SAPRG) under the leadership of Aston (Archie) Atkinson published a number of preliminary checklists of publishers and the cards they had produced. It soon became clear that these lists, although admirable starting points, were far from complete and it was for this reason that I proposed the compilation and subsequent publication of the South African Picture Postcard Catalogue.
Martin Nicholson - Ticklerton Barn, Ticklerton, Church Stretton, Shropshire
Email contact﻿﻿
﻿
﻿
Posted by Martin Nicholson at 00:42