How not to attract subscription paying members

A few weeks ago I applied to join a small specialist group that derives almost all its income from membership subscriptions. The group had what, at first sight, appeared to be a well-designed web site that was also tolerably up-to-date. The only feature that appeared slightly unusual was that although a prospective member could apply to join the group on-line there didn’t appear to be any option for paying the resultant subscription the same way.


I filled in the on-line application and pleasantly quickly I heard back from the President. He was away from his office and so he apologised for his short and rather impersonal reply promising to get back in touch within a couple of days. So far 10/10.


Ten days passed and I still had not heard anything so eventually I got back in touch with him and he apologised (again) and he promised (again) to respond – this time it was going to be “tonight”.   The score had dropped to 8/10 because although I appreciate that people have busy lives surely he had had a 15 minute slot sometime in 10 days to deal with society matters?


Needless to say he didn’t contact me and neither did the Treasurer or the Secretary who had also received a copy of my on-line application. Well I’m not going to chase them up again for a few weeks because I’m interested to see how long it will take them to successfully complete what really should have been a fairly simple task. As of today the score is 5/10.
The irony of publically accepting the need to attract new members when at the same time appearing unable to process applications in a timely manner is not lost on me.
Posted by Martin Nicholson at 01:53 No comments: 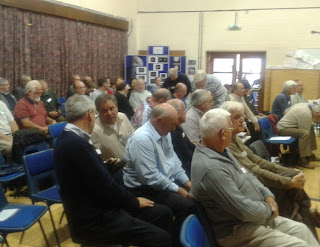 This picture was taken at the recent joint meeting of the British Astronomical Association Variable Star Section and subscribers to "The Astronomer" magazine.

What do you notice?

The audience is overwhelmingly male and almost as overwhelming looking over 65. I'm left wondering what will be the fate of groups like this in 10 years time? Where are the ladies and where are the younger members?

Despite all the time, money, energy and enthusiasm thrown at "Citizen Science" we are not getting enough young people into the hobby. If I was in my 20s or 30s I'm not sure I would feel comfortable joining a group that is so clearly dominated by retired people. It would be rather like joining the bowls club or engaging in "Walking for Health".

It all serves to remind me of the fate of some philatelic groups I used to belong to - used being the crucial word. These groups faded and died because the members felt unable or unwilling to move with the times. Broadening the appeal of the group was fought tooth and nail to the bitter end and some hardliners quite genuinely preferred to see the group close down rather than compromise on any aspect of the way the group operated.

Most of these hardliners have now moved on to the great meeting room in the sky. In most cases the legacy they left has been minimal because their vast knowledge of their chosen specialism was never recorded for posterity and died with them. In far too many cases the groups they supported with time and money over decades also died with them.

It is all very sad.

This jumped out at me today

"External signs of wealth and success are often cheap storefronts that hide internal mediocrity or even incompetence".

When I first became a college governor I was working in Somerset. My very first Chair of Governors was a large scale landowner and a local "worthy". He had no interest whatsoever in the views of other governors from outside his small inner circle - neither were the views of the pupils (16+) or their parents worth finding out, never mind acting upon. He had none of the attributes normally associated with being a "good" Chair and I always wondered how he came to be re-elected year after year.

When I first was elected as a staff governor the Principal (a gentleman in every sense of the word whose word was his bond) warned me in a friendly way about the utter indifference the Chair felt towards staff governors and the extreme hostility he seemed to feel towards trade unionists. This was always going to be a problem for me because I had been elected by trade union activists at the college who had become bored to death with the lap-dog inaction of the "Association of Agricultural Education Staff" (AAES). I don't the Chair ever spoke to me 1 to 1 during my years as an elected representative.

It was much the same with the officers of the West Africa Study Circle during my brief spell as a member. The senior posts were almost invariably held by those members with the most valuable stamp and postal history collections - regardless of their skills in other areas. Everything seemed to revolve around their convenience with 90% of the membership being regarded as little more than a source of subscription income.

Posted by Martin Nicholson at 02:33 No comments:

Being a school governor

When I started as a school governor back in the 1980’s both the number and complexity of the responsibilities that had to be dealt with were very much less than are now the case. It was also assumed that you would be able to serve your apprenticeship before other members would even consider asking you to take on the role of chairing a sub-committee.  Chairs and Vice-Chair were usually veterans with 10 or even 20 years of experience to draw on and most of the time deserved the respect with which they were treated by the other volunteers.


Fast forward to the present day.  The quality and quantity of people prepared to take on the role of a school governor has dropped significantly - not least because Government has dramatically increased the workload and this has meant that many more people have neither the time nor the inclination to spend their limited leisure time in this way. Governors are now being “forced” to take on positions of additional responsibility before they feel comfortable doing so and, more importantly, before they have the knowledge required to do the job.


I think it is extremely difficult to do the job of Chair of Governors unless you are retired since much of the job has to be done during the working day. It is also almost a prerequisite that you have a detailed knowledge of education before you take on the role – how else can you be expected to act as a critical friend to the school?  You need to know what questions to ask and what would be a reasonable answer.
I find it very difficult to understand how any school when the total experience of the Chair and Vice Chair is only 4 years can be expected to function effectively and I think it is grossly irresponsible of the Government to allow the current flawed system to continue.
Posted by Martin Nicholson at 04:22 No comments: