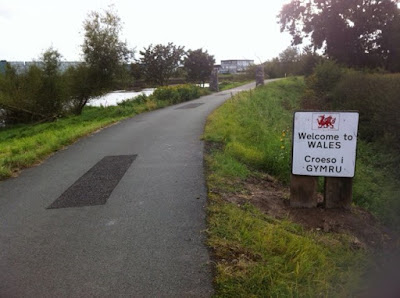 When I tell overseas members of my Facebook group that I live near the border between England and Wales I suspect that it conjures up images of the Mexico/USA or the Canada/USA border. Our border is nothing like that!


It is totally undefended and passage in either direction is entirely unregulated. There are no “border controls” and it is only on the major roads that there is even a sign to tell travellers that they have crossed from one country to the other. Any English or Scottish person can move to live and work in Wales without permission.


To an outsider this casual approach might seem rather strange especially once they realise that Wales now has its own Parliament and some of its laws are different from those that apply in England. The Welsh people even have their own language, and in a few areas it is still the first language of the residents, though everyone also speaks English.  It is thought important to preserve the language, so all road signs have both languages as soon as the border is crossed, and children in Welsh schools are taught the Welsh language.


There are many castles along the border between Wales and England that date from the time when the English and Welsh felt the need to build defences against each other.  Some are almost total ruins, others are well preserved, and all are now popular tourist attractions, many on hilltops and in isolated positions. In 1282 King Edward I of England won control of Wales, though some hostility continued for another 200 years.


Our passports declare that we belong to The United Kingdom of Great Britain and Northern Ireland.  Great Britain is the largest of the British Isles and to the west of it is the island of Ireland. Great Britain is comprised of England, Wales, and Scotland and all three used to be politically separate countries.
Posted by Martin Nicholson at 00:58