While it would be unfair not to acknowledge the excellence of some of the material presented in this book there is much that is rather disappointing. 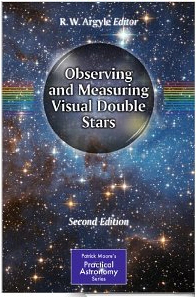 The chapters on “Double Star Sketching” (Perez), “Internet Astrometry” (Caballero) and “Lunar Occultations” (Appleby) are well written and all three fit neatly into the range of material that purchasers of the book would expect to find included.
I am not entirely convinced that the sections on “The Diffraction Grating Micrometer” (Maurer) or “Astrometric Speckle Interferometry” (Turner) will result in widespread adoption by amateur astronomers of the techniques described but the inclusion of these topics is a perfectly legitimate use of editorial discretion.

What is far more problematic is the impression that the page count - and hence the cost – have been inflated by the inclusion of chapters that are either irrelevant or almost devoid of scientific content. For example eclipsing binaries are not visual double stars and their inclusion in the book will confuse many readers.

I would have liked to see more information on astronomical data mining. This is one of the big growth areas in double star astronomy and three of the most active data miners in the world live within easy travelling distance of the editor.


Elsewhere Bob Argyle’s book has had mixed reviews. The effusive praise from his pals is in marked contrast to the concerns expressed by double star astronomers outside his sphere of influence and patronage. Those with short memories need to realise that Bob set himself up as the “Obergruppenführer for Double Stars” in the UK over 40 years ago and the Webb Society has become his personal fiefdom – he has been Chairman for 25 years. For most of that time Bob was on the cutting edge of Pro-Am double star work.


This is no longer the case. Bob is not the man he once was – like the rest of us oldies he is slowing down. The scope of his book was thus pretty much determined by the people who were prepared to work with him.Some of the best known and most active people in the field were either not invited or were invited but declined to get involved.
Bob, like the late John Greaves, is sometimes his own worst enemy. It is a standing joke that emails to him seldom receive a reply and that his support for the use of convoluted, inaccurate and imprecise measurement techniques when far better techniques exist is increasingly anachronistic.

To summarise. This is a 200 to 250 page book struggling to escape from a 400 page “prison”. An experienced observer will learn little of value from the book and the "net savvy" newcomer will probably find most of the content available for free elsewhere.

Posted by Martin Nicholson at 06:04